ARIS Reviews: The Final Review of Caraval by Stephanie Garber 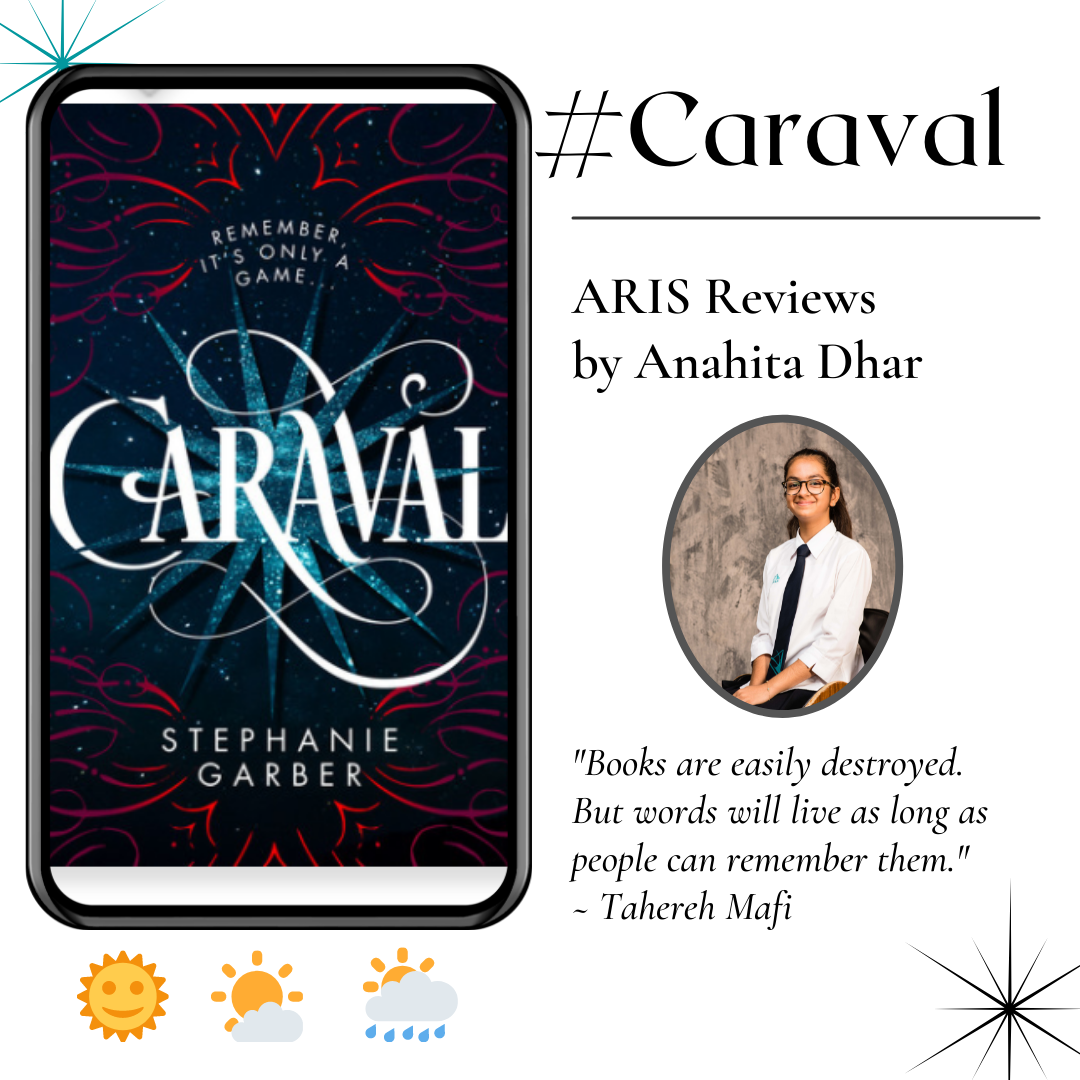 Welcome, welcome to Caraval! The grandest show on land or by sea. Inside you’ll experience more wonders than most people see in a lifetime. You can sip magic from a cup and buy dreams in a bottle. But before you fully enter into our world, you must remember it’s all a game. What happens beyond this gate may frighten or excite you, but don’t let any of it trick you. We will try to convince you it’s real, but all of it is a performance. A world built of make-believe. So while we want you to get swept away, be careful of being swept too far away. Dreams that come true can be beautiful, but they can also turn into nightmares when people won’t wake up

Hello! Thank you for taking time out of your day to read my ridiculously brilliant (it’s true) yet practical book review for Caraval. I want to start off by saying that I read this book over a year ago, so it won’t be tremendously analytical and descriptive. I don’t quite remember what my feelings towards the characters were, but in short: I found the main character, Scarlett Dragna, very uninteresting. Which was a real shame to be honest, as the setting of the book is spectacular, Caraval has some of the best world-building I’ve ever seen.

Here’s how it goes: Caraval is a magical performance that takes place once a year, and Scarlett has been yearning to witness it for years. She lives on a tiny, secluded island with her sister, Donatella and their father who has been abusing them since the sudden disappearance of their mother. She’s been writing letters to Caraval master: Legend (an absolutely fascinating character, I adore him), hoping for an invitation. Scarlett’s father, however, has other plans for her. He’s arranged for Scarlett to marry a mysterious Count, whom she has never met. For a moment all her hopes to behold Caraval in all its glory with her sister are crushed, but just then! Ah! The long awaited invitation arrives. However elated, Scarlett doesn’t think they should go, she’s about to marry the Count and she trusts that he is a good man who can offer the sisters a life of peace, something they haven’t experienced with their father. Tella disagrees. Tella, reckless and adventurous, argues that Scarlett should not marry a man she has never met and that any man that is affiliated with their father cannot possibly be “good”. She thinks they should go. Scarlett is not convinced. Now a normal sister would have let it go, maybe try again, but Tella drugs and kidnaps Scarlett to the island where Caraval is taking place with the help of an enigmatic sailor: Julian. Not hasty and uninhibited at all haha.

Caraval is a game in which you participate as a player, and solve clues to win. At the end of the game if you find whatever hidden object you’re supposed to, Legend - our beloved puppet master - will grant you any wish of your choice. Now the three of them get to Caraval and Scarlett is still slightly disoriented - from the drugging, geez Tella - and loses sight of her sister. Scarlett has no intention of actually participating. In fact she wants to have fun for maybe a day or two and return before her father realises they’re missing. But all this is before she finds out that the hidden “object” to find in this game is none other than Scarlett’s sister Tella. Now Scarlett has to win, and find her sister before anyone else does.

The thing about Caraval is, it is an extremely confusing game. The key predicament Scarlett faces throughout the book is separating what is real, from what is a part of the game. Is everyone she encounters during the game a real person? Or are they a performer that Legend is controlling? And who is Legend? Very few people know, and those who do are physically unable to reveal his true identity. She encounters so many strange people and falls deeper into a web of disconcertment. Is Julian who he says he is? And is Dante, who she encountered while playing, as amicable as he seems or is there something truly dastardly beneath the surface? So many questions and Scarlett isn’t sure she wants the answers. Caraval, a game where you buy things not with money but with “the last lie you told”, “two days of your life” or “your greatest fear”. A game run by an unpredictable, oracular and unknown man. A game in which her sister is the prize. Will she win her sister and use her wish to wish for a better life for them both? Or is she destined to lose it all in the end?

The Caraval trilogy is a magical and enchanting one and though I’ve (hopefully) made it sound incredibly interesting, I would rate this book using the (adequate) emoji. As I said, Scarlett’s character was incredibly monotonous, and I didn’t particularly enjoy the romance aspect either. So then why did I write my first review on a book I do not even love? Because of its potential!!!!! The second novel in the series is called Legendary and it truly lives up to its name. I cannot wait to review it and I hope that before I do, you’ve read Caraval! Because I will be expressing my opinions about EVERYTHING when it comes to Legendary. But yes, if you do end up reading Caraval now or later, please let me know! Through email, or literally, just come up to me in school and we can talk about it! Goodbye for now!