ARIS Reviews: It All Comes Back to You by Farah Naz Rishi 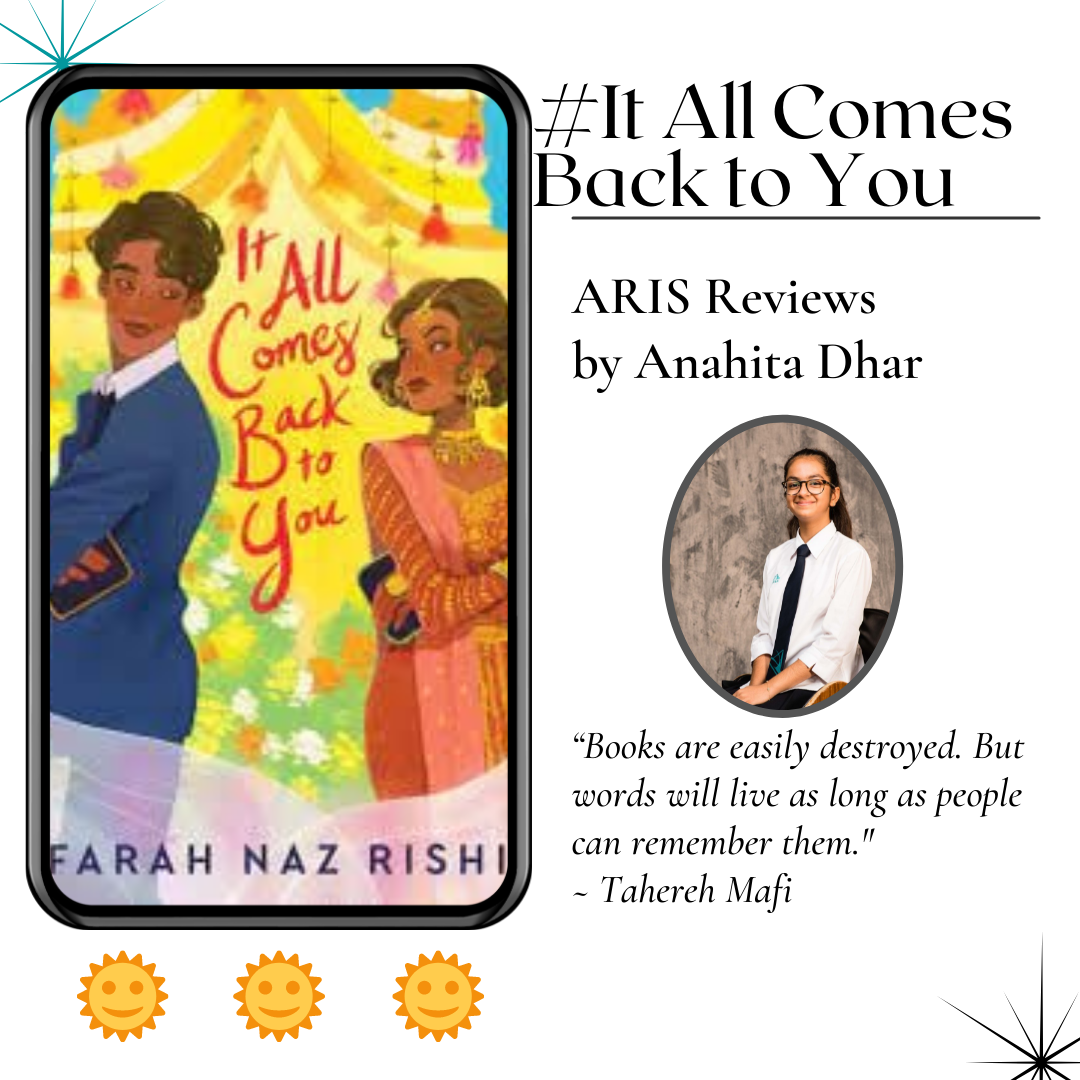 All’s fair in love and loathing

Hello, thank you for taking time out of your day to read my exceptional review on It All Comes Back To You by Farah Naz Rishi. Also, wow, no review for 2 months? The nerve. But really, I’m sorry, DP 1 has me swamped… I promise the reviews will not be sporadic and I am back on track. So, let’s get right into it then. The very first thing that drew me to this book was its inexplicably beautiful cover. It’s just so full of bright colours, and the characters on it are not only as pretty as a picture but also - get this - brown people! I think I a total of one more book that has brown people on its cover, a real tragedy. I believe there’s just a lack of YA romance novels that feature brown people in general, and I aspire to find and read as many of them as possible. No but seriously, go look up its cover because I’m truly obsessed with it.

Let's move on to the actual content of the novel. The story follows Amira and Faisal’s wedding. Amira’s little sister Kiran, and Faisal’s younger brother Deen, both know each other… due to some very unfortunate circumstances. Said younger brother, Deen Malik, dated and then proceeded to ghost Kiran three years ago, and now that they are forced to interact because of their siblings, the outcome is… unpleasant to say the least. There will be spoilers in this review, but I won’t reveal the biggest one.

Deen and Kiran met during Sunday school when they were 15. They started off as friends but their relationship - which they promised to keep a secret - quickly developed into more. Though the book is set in the present - where the pair are both 18 I presume - we get to see some texts between them, three years ago. The texts are absolutely hilarious, and I’ve gotta give it to Naz Rishi, as she’s probably the only author who’s ever gotten even mildly close to replicating how teenagers actually text. One of my favourites go like: Deen: I can’t believe you

Deen: who brings their Nintendo 3DS to the masjid
Deen: ???
Kiran: okay first of all
Kiran: you were THRILLED
Kiran: and second of all
Kiran: literally every kid under the age of 10.
Deen: And you, apparently
Kiran: and me
Kiran: what can I say
Kiran: I was inspired.
There’s so much more where this comes from! In addition to the hilarious glimpses of texts from three years ago, Deen and Kiran play this online game called Cambria and are pretty much best friends over there, though neither is aware who the other is, and the two have promised to not share any real life details.

The book starts off with Amira telling Kiran that she’s met a guy, fallen in love, and they’re now moving to California. This hits Kiran in the face like a ten ton truck. Because what happened to the apartment they were supposed to rent together? What happened to stay together as a family like their mom would've wanted? Said mom, who passed away less than a year ago, left Kiran with some very impactful parting words. “That’s the only thing that’s getting me through this, Kiran. Knowing you’re all together. Promise me you’ll look after them.” Words I think Kiran Noorani took a little too literally, but we’ll discuss that later. But the fact that Amira will be moving away with this guy isn’t the only thing that makes Kiran disapprove, it’s the fact that they met only 3 months ago, and honestly, I’m with Kiran on this one. That is… too quick. Kiran’s thoughts at the moment, I think, are completely justified. “What about visiting mom's grave together and crying together to make up for the grieving I couldn't do because I was waiting for her? What about dad, and living together as a family again, as mom wanted - does that mean nothing to her? What about me?” Kiran just wants her sister to be there for her, and though it might seem a little selfish, who can blame her?

We then get a chapter from Deen’s perspective in which we get a clear view of his lackadaisical approach to life. He’s funny though, so I immediately took a liking to him. When Deen’s brother Faisal calls him over to tell him the same news, he, as opposed to Kiran, is thrilled. Deen and Faisal share a secret, something we don’t know yet, all we do know is that Deen feels guilty, and indebted towards his brother. The ‘secret’ is something Faisal took the fall for, and it kind of ruined his life. Something their parents never let him forget. Deen knows all this, he also knows about Amira, and how she brought Faisal’s dreams and hopes back to life. Amira and Faisal found each other when they were both facing hardships, they both gave each other reasons to go on, and since Deen feels so responsible for everything his brother went through (“the secret”), what else can he feel but happiness?

Now because Kiran used to know Deen, she knows a little bit about Faisal too. When the two used to date, she’d heard some concerning rumours about Faisal, which when she remembers, only adds to the list of reasons she doesn’t want Amira marrying him. Here is where I start slightly disliking Kiran. Which, honestly, is unjustified. Over the course of the entire book she goes above and beyond to find proof of Faisal’s dark past, to break up the marriage. She knows Deen and Faisal are hiding things from her, she’s confronted Deen about it who simply feigned indifference. And like… I get that Deen feels protective of his brother and their mutual secret but - and to quickly put myself in the shoes of a wise old woman who’s been married for 60 years - that’s not how marriage works. Marriage cannot be built on secrets. I, the reader, have read chapters from Deen’s perspective and I know Faisal from his point of view, and I know he’s a good guy. Kiran doesn’t. And how is anyone supposed to blame her for trying to look out for her sister? Yeah she crossed some lines and a flaw in her plan to stop the marriage was keeping Amira in the dark the whole time, which blew up in her face by the way, but she did what she had to. Kiran refers to what her mom said to her, a couple of times during the book, to try and remind herself why she’s doing what she’s doing. “That’s the only thing that’s getting me through this, Kiran. Knowing you’re all together.” If you look into the physical copy I have of the book, you’d see the last sentence is underlined and there’s a note next to it “doesn’t have to mean physically”. I think her mom could’ve meant that she just still wants them to be a family you know? You don’t have to live together and interact with one another 24/7 to be “together”. Just loving each other, no matter the distance is what makes you family. You can be together even when you’re miles apart. So sappy, forgive me.

As committed as Kiran is to stop the marriage, Deen is just as committed to making sure it happens. “This isn't about you. It's about Amira and Faisal. We're here for them and that's it.” I would wholeheartedly agree with Deen if he wasn’t keeping like, major secrets from his future sister-in-law. That’s messed up Malik. And then Kiran (who I am very unfairly still on edge about) says, or thinks … I do agree. “Except what does it really mean to be there for someone? Does it mean supporting them no matter what they do? Or does it mean stopping them before they take a dangerous plunge, even if you risk them hating you forever? Isn’t it a sisters job to interfere if you're about to do something stupid?” I feel like I keep repeating myself: Kiran crossed the line… but she was also kind of forced to? She definitely could’ve made some better choices but she really just cared about Amira. She doesn’t know Faisal the way Deen and I do. Just realised I haven’t mentioned how much I adore Faisal?! I know, I know, he’s keeping secrets from Amira (whom I also adore as she reminds me of a very similar, bubbly friend of mine) but I’m going to play the you-don’t-even-know-him card here because he’s truly a really great guy. “This whole time, I thought I was fighting on the side of truth when really I was just forcing Faisal to expose his own trauma” Oh Kiran, if only you knew him like Deen and I did :(

Skipping through a lot because of spoilers but, when the wedding blows up (NOT A SPOILER BECAUSE WHAT DID YOU THINK WAS GOING TO HAPPEN) Kiran’s dad falls sick and faints and Faisal is the only one around, they’re put in a position to trust each other. Faisal stepped up and handles the situation really well. That guy is really awesome man. He was so comforting throughout, and apologetic about the whole lying thing too.

Another scene towards the end that I love is when Deen talks to Imam Obeid, who’s been sort of a marriage counselor for Amira and Faisal. Which was before, obviously, since the marriage never happened. He gives Deen some stellar advice about his guilt and the debt he thinks he owes Faisal. It was a very heartwarming conversation. “The issue here is that you need to forgive yourself so you can move forward.” Since Deen was never close to either of his parents, in this one moment, Imam Obeid seemed to take on the role of a father figure to help Deen forgive himself.

So yeah. Good book!! It didn’t have much romance though, barely any, but still was a fun casual read. It was pretty funny and I enjoyed reading about a culture I could slightly relate to. The wedding preparations were really familiar and made me feel nostalgic. I’d say it gets this: ☀️ emoji, which means it was good. Also, I’m kind of proud of how I got through the entire review without mentioning what “the secret” was.

Something I forgot to mention, remember the online game both Kiran and Deen play in the present? We get to see their chats on there too and they’re just as fun as the texts from three years ago and here’s one of my favourites:

Kasia Coribund (Kiran): How do you know when you’re actually safe with someone? Devynius Foxx (Deen): Like here?
Devynius Foxx: Like us?
Devynius Foxx: It’s a shame there’s no suggestive “waggle eyebrows” emoticon.

It’s not as blatantly funny as the Nintendo 3DS one, but it’s ironic how well they like each other, while simultaneously hating each other in real life. We see that Deen has not lost his charm, a gift to us all. Now all that’s left to do after reading my exceptional review is to go pick it up to read! Make sure to admire its cover for a minimum of 5 minutes before starting!